The Church of the Holy Sepulcher in Jerusalem, and the Via Dolorosa 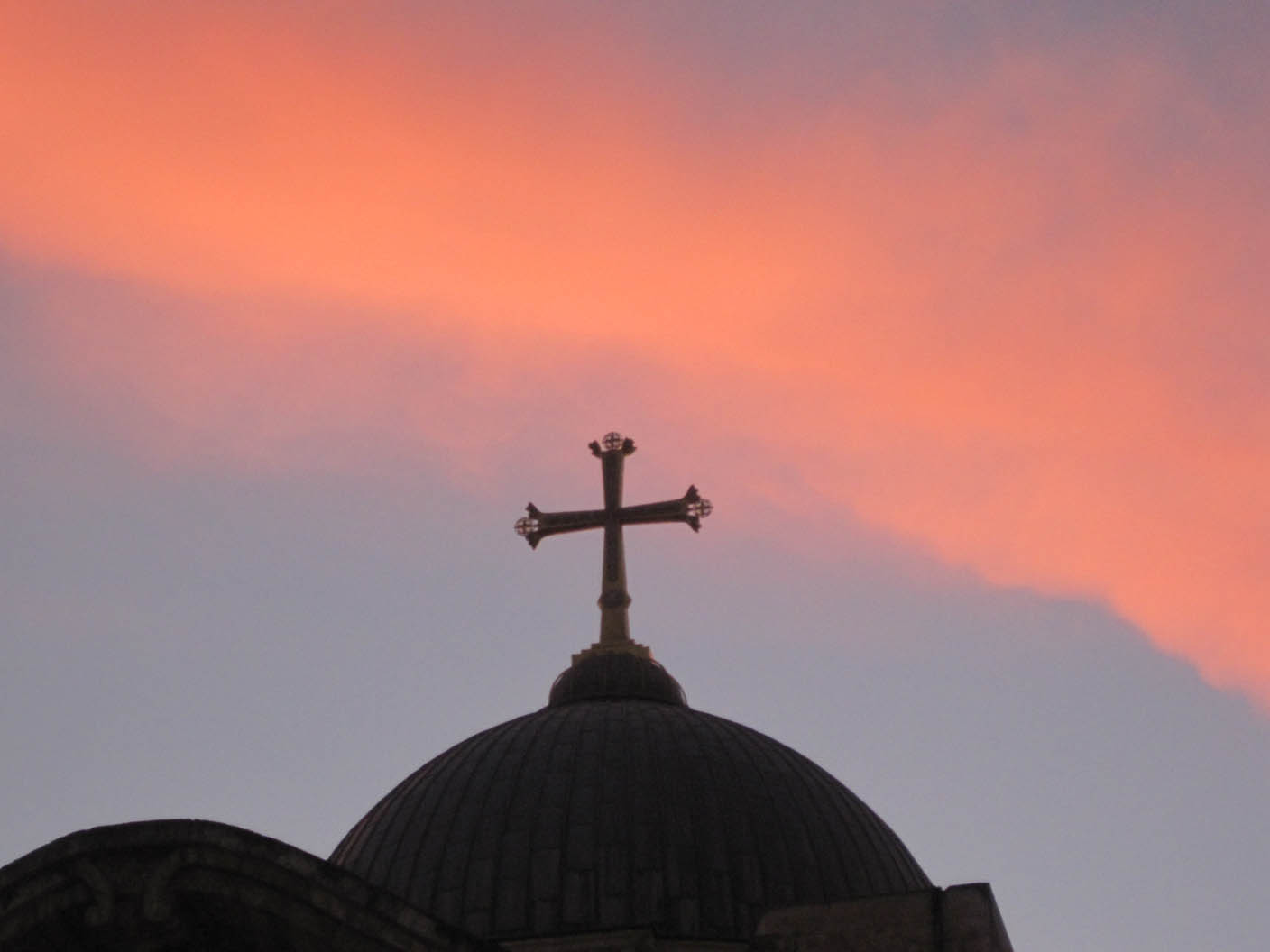 Jerusalem is considered by Jews, Christians and Muslims as the Holy City. For all these religions, Jerusalem is significant as the site of historical saints and prophets such as: Abraham, Solomon, David, Zachary, Hezekiah, Jeremiah, Isaiah, Jesus and others.

In the center of the Old City of Jerusalem, there is The Church of the Holy Sepulcher. In this place Jesus was crucified, buried and resurrected. This sacred site is the most important Christian site in the world. Every Christian in the world that wishes to perform pilgrimage will visit this holy place.

In the Holy Bible, the Holy Land and Jerusalem are God’s property; what significant is the literary representation of Jerusalem as a foundling, reared by God, and the promises of God to the city in Psalms. As described in the “Mishna” and codified in the “Shulchan Aruch”, Jewish pray in the direction of Jerusalem and the Temple Mount.

Where is Jerusalem is the Holy City, it is the site of the Temple, the Crucifixion and the Resurrection of Jesus. As mentioned in the New Testament, Jesus was taken shortly after his birth to this Temple. The Last Supper, evening before the Crucifixion, took place in Jerusalem. Outside the city walls, Jesus was crucified and buried. 300 years later, the Church of the Holy Sepulcher was built at the same place.

So, where is Jerusalem?

Since the 10th century BC Jerusalem is known as the site of King Solomon’s First Temple, which was built on the top of Mount Moriah. The Second Temple was built also at the same place.

Church of the Holy Sepulcher

The Church of the Holy Sepulcher (and the Resurrection), located in the Christian Quarter of the Old City of Jerusalem.
At this place, Jesus Christ was crucified and three days later was resurrected.

The church was first build in 335AD. The church was destroyed and restored several times during the rule of the Byzantine Empire and the Crusaders. The Crusaders in the 12th century gave the church its current appearance.

Inside the church lies a reddish slab of stone. This is the Stone of the Unction (Anointing), where the body of Jesus was laid after being removed from the crucifix and prepared for burial. He was anointed and wrapped in with the shrouds. Many pilgrims kiss the stone or place crosses and additional items on it.

To the right of the entrance, several stairs lead us to the upper part of the church. This is the place where Jesus was crucified. This is the hill of the Golgotha.

In the level of the Golgotha hill, on the right is a chapel featuring a mosaic of Jesus being nailed to the cross. To the left is a chapel with a Cross on top of the bedrock, the hill of the Golgotha. These two chapels are two of the 14 Stations of the Cross of the Via Dolorosa (stations11 and 12), the last journey of Jesus, before he was crucified on this place.

Under Golgotha is the Chapel of Adam. Here Adam was buried, and Jesus atoned for the original sins, mentioned in the Book of Genesis, with his blood dripping on Adam’s skull, after he was dead.

Steps leading down to the Chapel of Finding the Cross, where Helena, Emperor Constantine’s mother, had found and identified the True Cross.

The Stone of Unction, also known as the Stone of Anointing, is the place where the body of Jesus was laid down, after being removed from the crucifix and prepared for its burial, by Joseph of Arimathea.

The body of Jesus was anointed with oil and spices, and wrapped in shrouds, as preparation for burial.

The Stone of Unction is located at the entrance of the Church of the Holy Sepulcher. The stone is a polished red stone, in the size of three by one meters.

The Golgotha (Calvary)in the Church of the Holy Sepulcher is the specific place where Jesus was crucified and dies on the cross. This is a small hill, outside of the walls of Jerusalem, almost 2,000 years ago. This is the Twelfth Station of the Cross in the Via Dolorosa.

In the Holy Bible, the place where Jesus was crucified is the Golgotha (from the Aramaic word for skull). According to tradition, Adam, the first man, was buried underneath the Golgotha hill. The blood of Jesus dripped onto Adam’s skull, symbolizing forgiveness for the Original Sin of Adam (the eating of the forbidden fruit).

In the background there is Jesus on the cross and above him is his conviction “INRI – This is Jesus from Nazareth the King of the Jews”. The lower and main part of the Golgotha hill is visible in the Chapel of Adam, beneath us.

The Rotunda and the Edicule in the Church of the Holy Sepulcher lie in the center of the church. The Rotunda is a round hall, and in the center lays the Edicule, a rectangular structure, the Tomb of Jesus. This is the Fourteenth Station of the Cross.

There are two chambers in the Edicule. The first chamber holds The Chapel of the Angel, which contains a piece of the rolling stone that was rolled in front of the tomb of Jesus and opened at the time of the resurrection. The second chamber in an interior room is the Holy Sepulcher itself, the Tomb of Jesus.

Jesus was removed down the cross as the Sabbath(Saturday) was approaching, and there was no time to find him a proper burial place. Joseph of Arimathea offered his family’s burial cave that was located nearby. When Mary, the mother of Jesus, and Mary Magdalene, returned to the tomb on Sunday, they found that the rolling stone was removing and the grave was empty.

Every year on Holy Saturday, the Holy Fire ceremony is celebrated. The Greek Orthodox Patriarch enters the Tomb. The Holy Fire, symbolizing the Resurrection of Jesus, descends from Heaven, lights the candle in the hand of the Patriarch and the flame is passed along to the believers standing around him in the Rotunda.

By tradition Jesus walked along this road called Via Dolorosa, carrying a cross on his back, from the place where he was sentenced, to his crucifixion in Golgotha (Calvary) in the heart of the Christian Quarter in Jerusalem. In the days of the Roman Empire a convicted person was forced to carry an agonizingly heavy cross, as a deterrent for all to see and fear. The one and a quarter kilometer Via Dolorosa, with the 14 Stations of the Cross, passed through part of the Moslem Quarter and most of the Christian Quarter. Nine of the stations are situated along the road, and the other five are in the Church of the Holy Sepulcher. The stations along the road are commemorated by various churches marked by sequential numbers, each symbolizing different events that occurred while Jesus was carrying the cross. 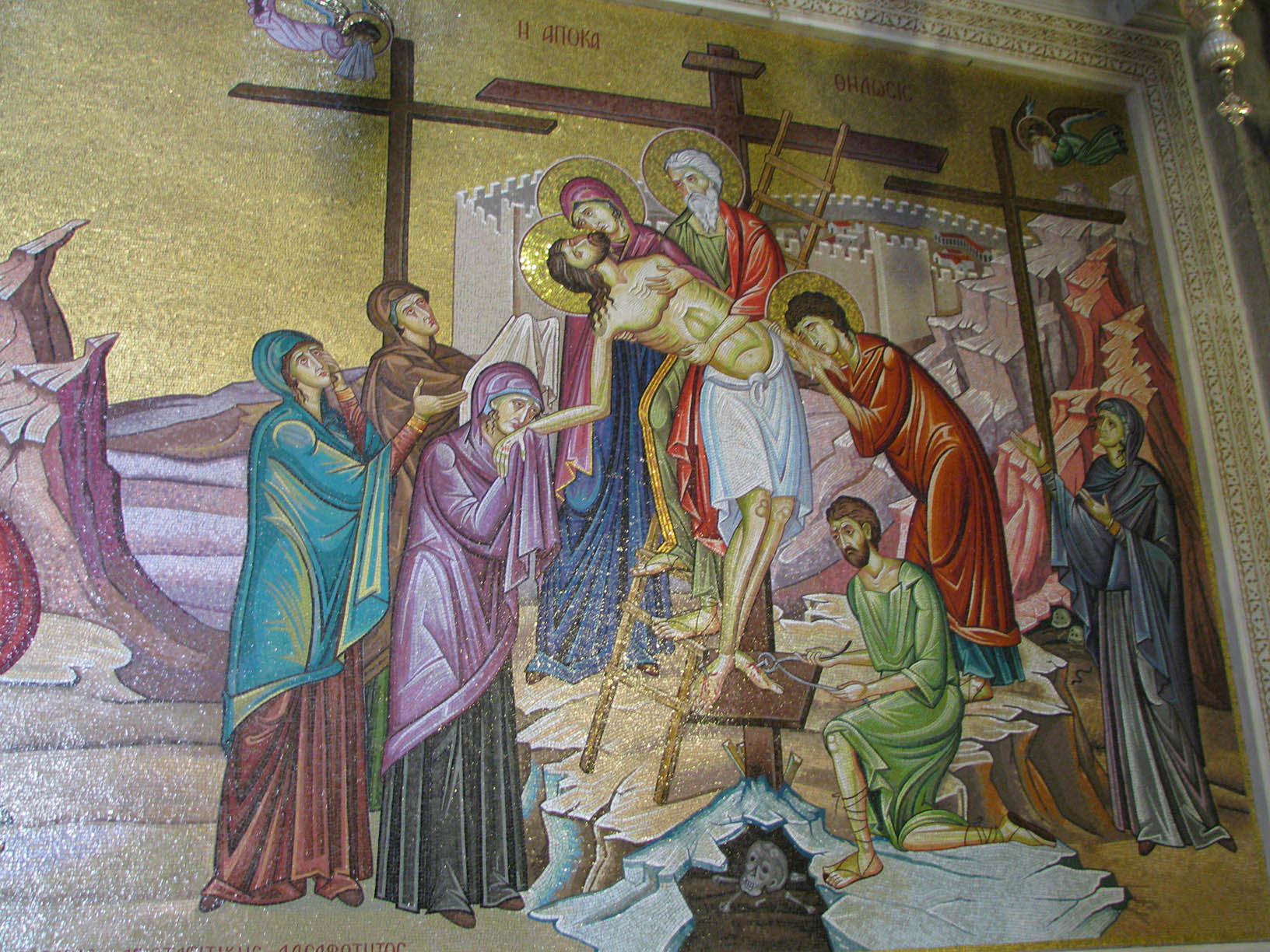 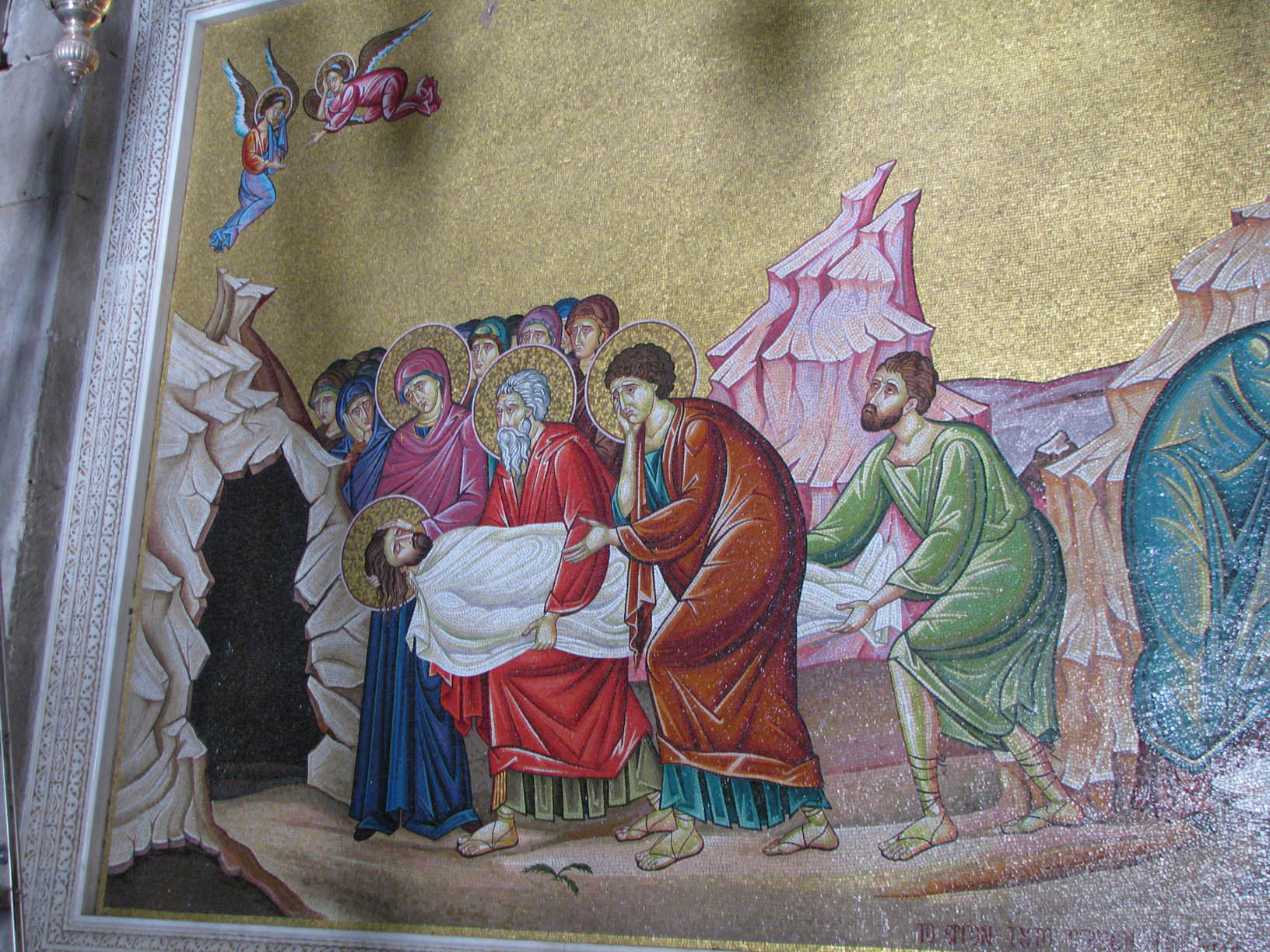 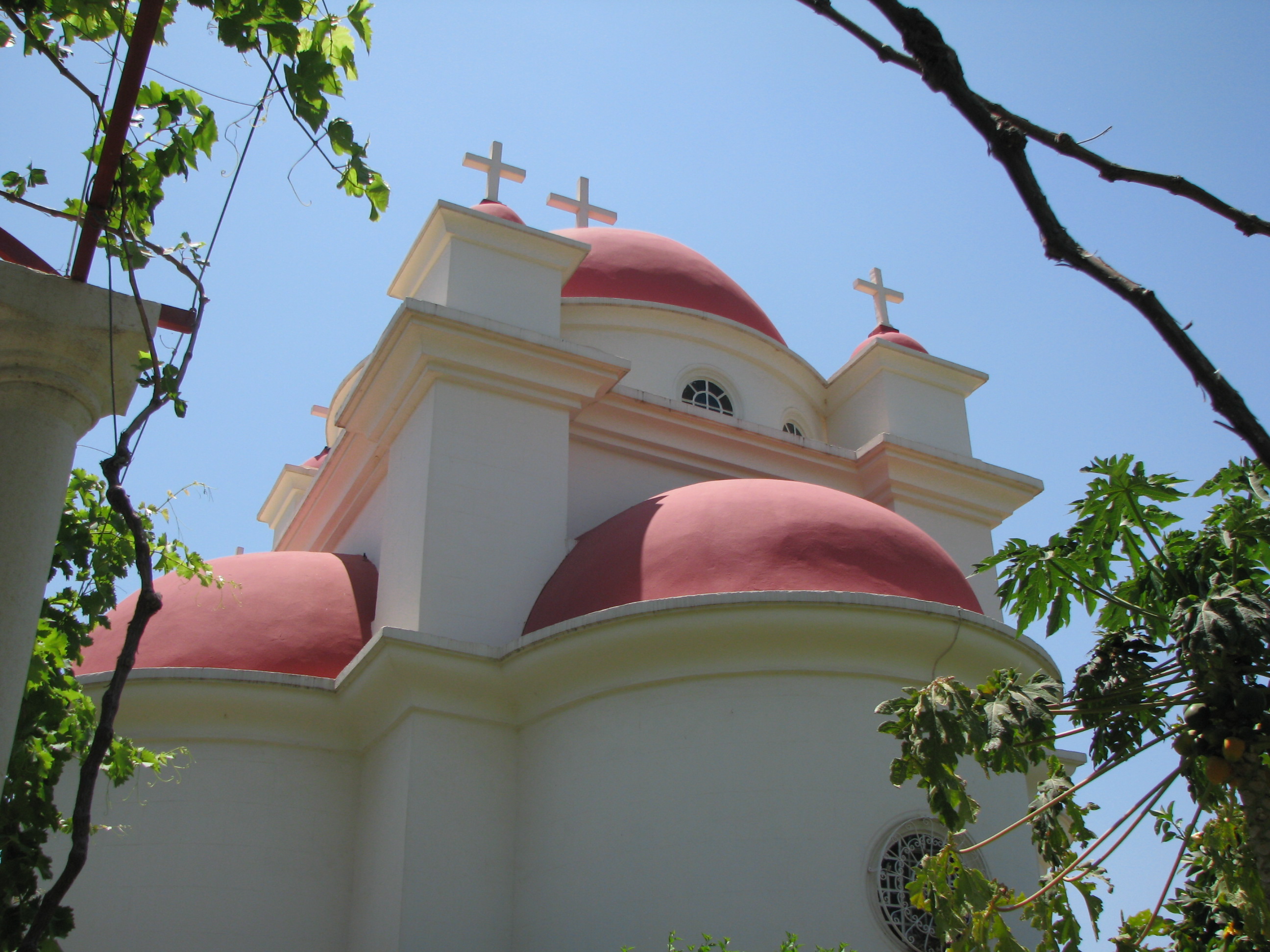 Christianity in the Galilee

Visit Nazareth, Capernaum and the Sea of Galilee, in the Steps of Jesus

The Church of the Holy Sepulcher in Jerusalem, and the Via Dolorosa