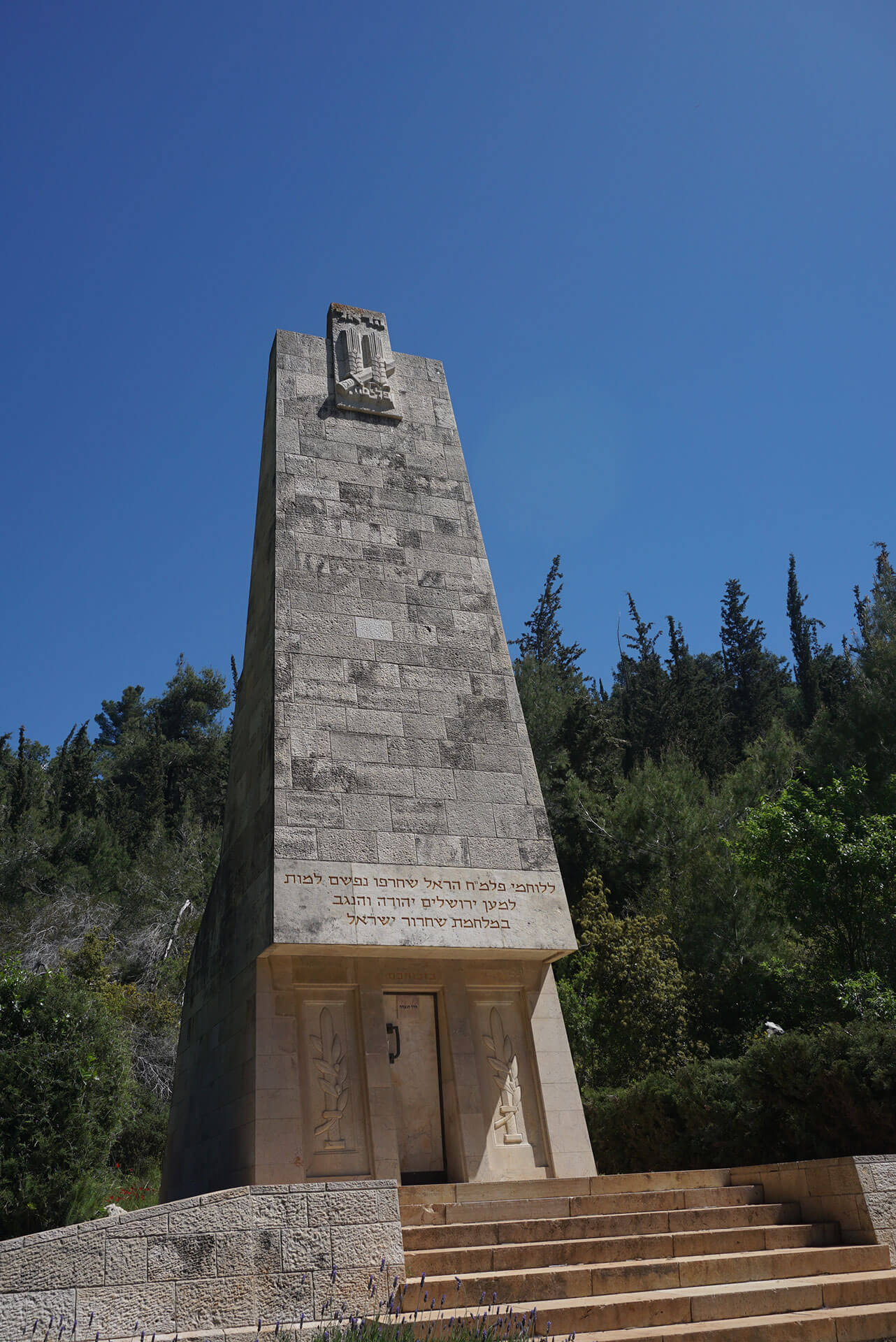 "Wearing combat equipment and sand, their shoes are heavy

In the path, they will go up in silence

They did not change their clothes, did not erase with water

The battles on the road to Jerusalem and inside the city itself during the War of Independence were difficult and long. Finally, Jerusalem was attached to the young State of Israel.

The tour below describes 3 points, which mark important events in the war on Jerusalem during the War of Independence (1947-1949).

‘Convoy spur’ - along the road to Jerusalem

How to get there - Drop south from Route # 1 to Route # 3955, towards Shoresh and Beit Meir. Just before Beit Meir, a footpath runs north to a dirt road with a green footpath marking. A moderate walk of about 1.5 km, pass posts # 16 and # 21 and view slightly west of post # 21. The road will take us to the viewpoint overlooking Highway # 1.

On the left (west), you can see the Judean Lowland towards the city of Tel Aviv and on the right (East) the road to the city of Jerusalem.

According to the United Nations Partition Plan proposed in November 1947 - Jerusalem is not part of the Jewish state. David Ben-Gurion said: "There is Jerusalem without a state, but no state without Jerusalem." The war over the road to Jerusalem is the greatest drama. If the Arabs had managed to conquer the road leading to Jerusalem, 100,000 people, 1/6 of the Jewish population, were cut off.

Below us is Route # 1, which was the only road to Jerusalem at the beginning of the War of Independence. Due to the failure of ‘Abd al-Kader al-Husseini in the attack on Gush Etzion, al-Husseini realized that the road to Jerusalem passes between Arab-controlled villages and was easy to control by his forces. At the time, the road was very narrow and difficult to maneuver, and the traffic crept. Down, in the road leading to Jerusalem, the Jewish convoys were driving, while up, on the hills, were Arabs, who easily controlled with little weapons on the road. To hit the convoys, there is no need to go through a sniper course. The Arab fighters would gather here in positions and shoot at the cars coming to Jerusalem as a stationary target.

In April 1948, David Ben-Gurion gathered a more considerable force of soldiers from all over the country, putting at risk the defense of communities and villages and exposing fronts to potential Arab attacks. The goal was to seize areas that control the road leading to the city of Jerusalem and to create a corridor to Jerusalem. Any area captured by the Jewish forces would be immediately annexed to the Jewish state. Ben-Gurion said that if a village in the north of the land would fall into the hands of the Arabs, you can ‘live’ with it. But if Jerusalem would fall, the towns and villages in the periphery will also fall into the hand of the Arabs. Such a perception gave rise to daring, which gave birth to ‘Operation Nachshon.’ The plan was to embark on the attack, capturing the Arab villages of Castel, Colonia, Hulda, and Deir Muhsein. As a result, the road to the city of Jerusalem was finally released.

How to get there - The St. Simon Monastery is located in the Katamon neighborhood of Jerusalem, east of Shai Agnon Boulevard, the corner of Ma'ale Ze'ev Street. In a single vehicle, you can travel along Ma'ale Ze'ev Street to the monastery itself, which is inside a park.

When Rafful (nickname for the late Chief of Staff of the IDF, Refa’el Eitan) was appointed chief of staff, a speech was made by him at the Israeli President's Residence: "Not far from here, 30 years ago, Jerusalem's future was decided during a bloody battle to become once again the capital of the people of Israel forever. I was privileged to take part in that battle and feel great honor today, while standing at this location, to be appointed as chief of staff for the IDF”.  The nomination to become Chief of Staff was Rafful's life record, but nevertheless, he emphasized in a 34-word speech his participation in the battle at n’s Monastery. Who heard of the battle of San Simon? This battle is one of the great dramas of the War of Independence, it has determined that West Jerusalem will remain in our hands! If the Katamon neighborhood had been left in the hands of the Arabs, there would be no Talpiot, no Makor Haim, and no Ramat Rachel (names of other neighborhoods in Jerusalem.)

The course of happening

Arab-controlled the Katamon neighborhood. Hundreds of Iraqi Battalion volunteers were stationed there. On April 29, 1948, after dark, two companies from the Fourth Battalion of the Har’el Brigade (in the Palmach) ascended through the Valley of the Cross. The Arabs discovered them and opened fire with a huge blow.                    By 2:30 AM, the soldiers managed to penetrate the monastery. The Arabs were not willing to accept this take over; they did not give up. At 4.30 AM, a massive blow of fire opens. The soldiers fired back and threw grenades. During the morning, the number of casualties is on the rise; out of 120 soldiers, over 50% are already injured.     The two companies are on the verge of collapse, and there is permission to withdraw. There are badly casualties that cannot be taken by the withdrawing force; also, bodies cannot be taken. A plan was formulated to blow up the badly wounded, "Masada in Jerusalem". Terrible drama and great frustration. At the last moment, it was learned that the Arabs were withdrawing and fleeing from the area. The wounded soldiers who were condemned to death were saved, and West Jerusalem was ours!

One of the fighters in the battle is Yoram Kenyuk (A famous Israeli writer): "On the roof of the monastery in Katamon, they fought a pupil against a pupil, waited like a wounded aching animal to see who would blink first. The Arabs blinked first and thus saved Jerusalem."

How to get there – Get off Highway # 1 at Hemmed interchange, head north towards Kiryat ‘Anavim. The Military cemetery is located east of the kibbutz.

This cemetery is the only Brigade Military divisional cemetery in the country, commemorating the victims of the Har’el Brigade. This is where the Har’el-Palmach Brigade was stationed, and it was from here that all the operations embarked. Still, not all the Har’el Brigade fallen soldiers are buried here.

The soldiers stationed here were continually dealing with death. "They tell of Jimmy passing through one of the nights with a unit near the cemetery, and from up the hill, they saw members of the kibbutz digging. The soldiers were shocked." This is what they are preparing for us! " That thought shook everyone's head." Hey there! You! Work faster there! Be ready! We've already left ... "Jimmy shouted down, heading to the cemetery." (From the book ‘Friends Tell About Jimmy’). ‘Boom, Boom, Boom - The Battle of Har’el’ by Haim Hefer, this song tells about the hammer beats. The buried soldiers here were killed during the battles at Nabi Samuel, Castel, San Simon, and the fighters along the road to Jerusalem.

Rafful (late Refa’el Eitan) still remembered Haim Poznansky favorably when he was the Chief of Staff of the IDF. Poznansky was a company commander in the Har’el-Palmach Brigade, and these were his memories: "Poza (Poznansky nickname) is a revered figure! Poza made many soldiers raise their head, to continue. He was a great fighter, a brave one. People admired him.  If there was no Poza - there was no way, no way - no Jerusalem, no Jerusalem - no state."